Amazon, which employs about 1.3 million people in the United States, recently announced that it will no longer pre-screen potential employees for marijuana use. The Amazon marijuana policy statement also included an official endorsement for federal legalization of marijuana.

The company is not exactly leading on this issue. Other companies have announced they will not pre-screen job applicants for marijuana, including the NFL (which also is researching the potential of marijuana for pain management).

Still, as one of the largest employers in the nation and around the world, the Amazon marijuana policy could have a big impact on other businesses, not just in drug screening policy but in support of marijuana legalization.

Dave Clark, Amazon’s CEO Worldwide Consumer, said in the statement: “Our public policy team will be actively supporting The Marijuana Opportunity Reinvestment and Expungement Act of 2021 (MORE Act)—federal legislation that would legalize marijuana at the federal level, expunge criminal records, and invest in impacted communities.

“We hope that other employers will join us, and that policymakers will act swiftly to pass this law.”

The announcement came in a blog post with the headline: “Update on our vision to be Earth’s Best Employer and Earth’s Safest Place to Work.” That’s a reference to outgoing Amazon CEO Jeff Bezos’ statement that he wanted the company to achieve both those goals.

Clark said that the company had decided to eliminate marijuana from the pre-screening policy, noting that “in the past, like many employers, we’ve disqualified people from working at Amazon if they tested positive for marijuana use.”

With the law changes in states across the country legalizing marijuana, Clark said the company had decided to change course on the issue. There are two exceptions mentioned by Clark: Amazon will still drug test those who have positions regulated by the U.S. Department of Transportation, and also will test employees for drugs and alcohol after any incident.

It remains to be seen if Amazon’s endorsement of the MORE Act will lead other companies to do the same. U.S. House Judiciary Chair Jerry Nadler, a Democrat, reintroduced the act on May 28.

Although President Joe Biden has favored decriminalization of marijuana, he’s stopped short of endorsing legalization. However, marijuana advocates hope the Democrat-controlled Congress could finally end the federal prohibition on marijuana. Democrats maintain a slim margin in the U.S. Senate.

In a statement, Kassandra Frederique, Executive Director of the Drug Policy Alliance, called the new Amazon marijuana policy a “huge step forward.” She noted that drug-testing for cannabis has blocked millions of people from getting jobs.

We implore Amazon and other employers to let this be the starting point and not the goal post,” she said, later adding: “We urge other employers to take note and follow suit, ending this counterproductive practice once and for all.” 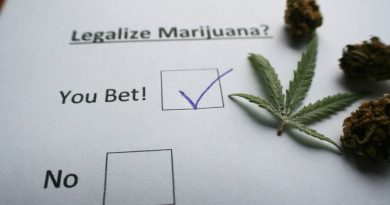