Grateful Dead drummer Mickey Hart is the latest celebrity to get into the cannabis business, launching a new line of products under the name Mind Your Head that features one of the most legendary strains of cannabis created in the United States.

Few celebrity entrants into the cannabis industry seem more appropriate than Hart. The Grateful Dead, one of the most popular touring bands of all time, had legions of followers, many of whom used marijuana long before states decided to legalize it.

On the Mind Your Head website, visitors are greeted by a very Dead-like paragraph: “Our botanically rich, transcendent products start with mindfully grown cannabis; harvested, sown and delivered with care and reverence for the Earth. Our mission is to transport your mind.”

In a Tweet, Hart said that he is “excited to share the launch of my new cannabis brand with the world. Our Magic Minis pre-rolls are empowered by the legendary strain Chemdog and are perfect for a creative adventure.”

Hart is making products for the Mind Your Head brand in a partnership with California company Left Coast Ventures. Since May, they have been offering Magic Mini ⅓ joints that are available at select dispensaries in Northern California.

They come in a tin of 10 with artwork designed by Hart.

The joints feature Chemdog, as mentioned by Hart in his Tweet. Many Grateful Dead fans know about Chemdog. It’s a legendary cannabis strain purchased outside of a Dead concert at Deer Creek, Indiana in 1991. The man who made the purchase – who later also became known as Chemdog – tracked down the sellers and ordered 13 legendary seeds from the strain, eventually creating Chemdog.

According to High Times, it originated somewhere near the California/Oregon border. It later was the source of other famous strains, including Sour Diesel and OG Kush.

Chemdog, on the Mind Your Head website, says he is “proud to see Chemdog featured in the first product from Mickey Hart.”

Cannabis Through the Ages

In an interview with Relix, Hart explained his fascination with cannabis. He talked about how it was used in ancient times by philosophers such as Pythagoras and Plato. He said they used cannabis for “visions, for mystical flight, for ritual. Our dance with this magical plant goes back, and it shows itself in all cultures, really, through the ages. It wasn’t just something we found in the ‘60s!”

Hart said the Dead “were outlaws” that were “chased for years” because of the band’s use of marijuana. But, he said, “we made it through all that nonsense to be in a place where it’s legal here in California.” How to Invest in Marijuana Stocks 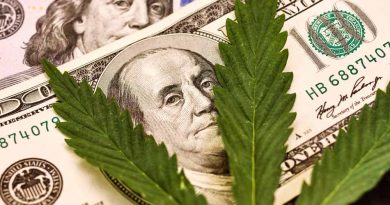 Why Do You Have to Use Cash to Buy Marijuana at Dispensaries?